A long-term technology trend, characteristically accelerated by the Internet, is the introduction of new ways to communicate that supplement existing channels rather than replacing them. Although many ultimately disappear, many have made it through the whole Ghandi-cycle (obscurity, ridicule, conflict, then success). Along the way, many technologies have provoked the most bizarre discussions about their raison d’être, as if any technology were ever self-justifying.

When you start using a technology that is still being ignored, people do not respond when you tell them that you are using it. Twitter is now in the ridicule phase, which I noticed as soon as I started telling people that I had opened a Twitter account: reactions are frequently both strong and dismissive.

Twitter is a way to quickly and frequently communicate what you are doing, according to Twitter’s own web site. 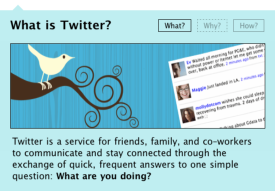 You even get a cute avian metaphor; Twitter posts are called 'tweets'.

The analytical approach to explaining Twitter considers how it relates to established Internet-based communication channels. 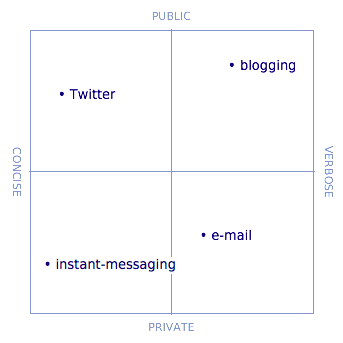 When I compare Twitter to blogging, I sometimes see in people’s eyes that they think that blogging is 'stupid' as well. Meanwhile, in the face of its clear mainstream success, they have either given up fighting it or are just keeping quiet because they know that they have lost.

There is a clear emotional and ideological gulf between people who write by choice or even for pleasure, and those for whom writing will only ever be 'work'. I blame schools. No wonder people who love or hate writing wind each other up, a situation hardly helped by contributions like Steve Yegge’s judgement that You Should Write Blogs, and other such evangelism.

Twitter is not for anything, it is up to you how you use it. Perhaps Twitter needs no more explanation or justification than web pages or printers do. These are all ways to publish information that each turn out to be useful in more than one way.

However, this hypothesis leads us to expect that Twitter will be copied or independently re-invented as the same thing with a different explanation as use. As far as I know, that has not happened yet.

Fortunately, Twitter is all about me, in common with the way that I experience other social networking software, so I get to decide how to use Twitter. Your mileage may vary.