After Nicolas and I said that ‘(Seam is the next Struts’ in our JavaPolis presentation, Max told us that ‘http://in.relation.to/Bloggers/Gavin[Gavin] will hate that’, which is funny because of how it takes our statement out of context. This article is the context. 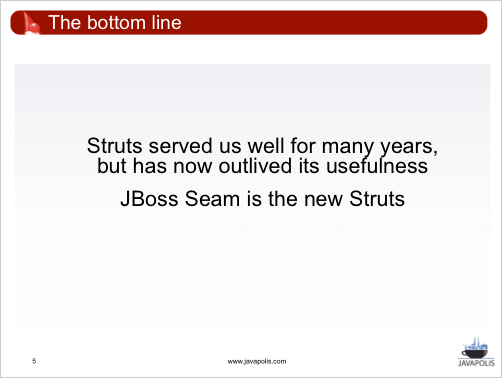 When we say that Seam is the new Struts, we mean that Seam will take over Struts’ position as the default choice for Java web applications. This is only going to happen because Seam is so different to Struts - enough of a revolution to topple Struts from its previously unassailable position of popularity.

Struts 1.x, which this article is about, has been a wildly popular Java web application framework for years. In fact, Struts became so popular that it is easy to use Google to solve Struts problems, which has meant that the alternatives would be harder to learn and use, despite whatever other advantages they may have had, such as being better technology.

Struts has outlived its usefulness

Since then, incremental improvements to competing web application frameworks have given way to entirely more sophisticated frameworks. Improvements in recent years both focus on improvements that eliminate previous annoyances, and replacements for whole technologies. The next generation of frameworks have a component-based model that abstracts away the HTTP API, the ability to use an application’s model classes for HTML form data, view definition mark-up that improves on JavaServer Pages, and integration between application layers using dependency injection.

Meanwhile, there are so many good Java libraries that implement useful functionality, that integrating libraries has become a more significant part of web application development than it was a few years ago. Part of this library-use expansion has been the increase in what Java EE covers, which matters because libraries that implement an official Java EE API are more respectable, especially in corporate IT and because more people are involved via the Java Community Process. This is why JavaServer Faces (JSF) is already popular, and why its eventual success is inevitable, despite its initial design flaws.

Seam is one of several frameworks, including Tapestry and Wicket, that offer a component-based approach to web application development. Technically, there are differences but they will not determine eventual popularity. Note that ‘Struts 2’, another of the competing frameworks, is really WebWork, which is significantly different to Struts 1.x.

Spring goes beyond providing a better view layer framework, by making it easy to integrate the view layer with back-end components such as a Hibernate data access layer. Spring provides additional classes that provide easy access to the Hibernate API from within Spring’s component model. In this sense, Seam follows Spring’s lead by integrating Java EE’s JSF view layer with its EJB model layer, making it far simpler to build real-world applications.

Why Seam is the new Struts

The first sense in which Seam is the new Struts is that Seam has replaced Struts for most web application projects here at Lunatech Research. In 2006 there were enough interesting alternatives that we decided not to start any new applications with Struts, so we had to choose its replacement. the result of the competition was not conclusive at the time, but we decided to use Seam for our next project. Seam has two killer features, from our point of view: Facelets’ approach to defining views as well-formed XHTML (shared by Tapestry and Wicket) and Enterprise Java Beans 3 (EJB3) integration.

A year on, almost all of our initial problems and complaints have been resolved, we have two products now using Seam, and it is increasingly unlikely that a new project will use something else. So, where Struts was the default framework at Lunatech, Seam is the new Struts.

Looking beyond our own organisation, we are certainly curious to know how popular Seam is globally, not least because popularity is good for more and better documentation, books, tutorials and Google-aided solutions to problems. In the absence of any real data on popularity, however, we shall have to rely on pure speculation.

Seam’s integration of JSF, EJB3, Hibernate and JAAS make it a natural choice for developers who are using those technologies, especially given Seam’s improvements, such as annotations that you can use instead of XML configuration. The same applies, of course, to the other libraries that are integrated, such as iText. For integrated libraries, Seam provides some combination of annotations that replace libraries’ XML configurations, Seam components that allow you to use dependency injection to access library classes, and JSF components for use in views.

It turns out be be convenient that a Seam release includes compatible versions of many other libraries. In a way, the same thing has happened with Eclipse plug-ins. The de-facto set of plug-ins for Java web application development is now so big that it is simply easier to avoid version management issues by using a combined download and use one of the annual simultaneous releases.

Another aspect of Seam that will stimulate mass adoption is that it does not prescribe one true coding style, architecture or pattern, which will allow more people to fit it to their tastes or needs. For example, a ‘backing bean’ can be an EJB or a POJO, and you can have one per page or share them between views.

The future is, of course, uncertain but Seam currently has the ingredients of future Struts-like success: compelling web application framework technology improvements, integration with the evolving Java EE platform, Java Community Process involvement, high-quality documentation, a high-traffic users’ forum, the commitment of smart developers who get things done and, with the recent launch of the seamframework.org web site, its own home - symbolic independence from its corporate sponsors.