In The Seven Habits For Highly Effective People, Stephen Covey says some useful things about task management (habits 1-3), but obscures it in excruciatingly tacky language. The ideas are fairly straightforward, and boil down to four 'generations of task management': task lists, scheduling, prioritised tasks, and urgent versus important tasks - the quadrant model. The interesting part concerns what you should be doing in the first place - why should even have a list of tasks, and how you know what is important to you.

The motivation for task management

A common approach to life and work is to go with the flow, reacting to the external environment and things that happen. You can achieve more if you take the initiative. This means doing things: tasks. Task management is about taking control of which things you work on. Or maybe you just have a bad memory, or like lists.

First-generation task management involves making one or more task lists, so you do not forget tasks that need to be done, and so that you can see how many tasks for a given project are complete. In this sense, first-generation task management is most focused on the past: what is complete. This allows you to answer the question Are you done yet? but does not help with planning very much.

Value: it prompts you to think about what you want to work on, in terms of what is a realistic task to set yourself, and what results you want to achieve. This is why Covey's first habit is Be proactive!

Main failure: there are always arbitrarily many things to put on the list, so in practice the list is never completed. The main response to this is to work a day at a time: write down a task list for what you are going to do today, which can help, but can also create inflexibility - unwillingness to change the list during the day.

Software: Ta-da List is a good bare-bones task list, implemented as an AJAX web application. If you prefer paper to on-line access try PocketMod, and if you live on a command-line, try todo.txt.

For example, when I was working as webmaster for a company intranet a few years ago was constantly juggling support tasks with intranet development, as well as an external customer project and other company meetings. Initially, I would think that I'll go and talk to the marketing department guy later and I'll fix this bug in that hacked together intranet page and then I'll replace the whole thing later. However, this did not work because there were enough new tasks appearing that 'later' never happened. Things improved when I realised that I knew how long most of the tasks would take, so I scheduled them in my calendar and was able to decide at the start of the day what I would get done and how much time I would have for urgent things that came up during the day.

Value: introduces the essential concept of limited available time. Most people get turned-off by task lists because they generally grow faster than they shrink, becoming harder to manage and generating stress because there is not enough time to do all of the tasks. This is wrong thinking: time is fixed (in this universe) - you just have too many tasks.

Main failure: your future schedule gets quickly filled up with other people's crap - commitments for pointless meetings and tasks in one-hour blocks, which makes it hard to work on the important stuff that other people do not care about, and makes your schedule inflexible. It is right that a full and detailed calendar gives you a bad feeling.

Software: Apple iCal is the best calendar application, and a sufficient reason to use a Mac. Lots of other people are stuck with Microsoft Outlook whose main failing is its continued lack of iCalendar support.

Third-generation task management recognises that you have to prioritise tasks - perform task triage to divide demands on your time into 'now', 'later' and 'never'. In particular, this encourages you to identify the next step for each project.

Main failure: priority often tends to become driven by which task is most late, as planning slips into crisis management, and important long term tasks or tasks with far-away deadlines get ignored until they are almost late. This breaks the idea of very important and replaces it with most late, making it difficult to get much value from task priorities.

Software implementation: just about every first- and second-generation task management implementation supports priorities, and for those that do not you can always prefix task names with a number or letter.

Paul Graham explains this in Good and Bad Procrastination: 'There are three variants of procrastination, depending on what you do instead of working on something: you could work on (a) nothing, (b) something less important, or (c) something more important. That last type, I'd argue, is good procrastination.' He goes on to explain that this means putting off the 'small stuff', which is 'work that has zero chance of being mentioned in your obituary' White Dot's Quiz provides further insights.

Value: helps you avoid wasting time on activities that seem urgent but are really not important, like watching television.

Main failure: it is difficult to be able to accurately define what is important. The formal way to do this is in terms of a strategy, or a mission statement that expresses a strategy. Fourth-generation is also poorly supported by task list software, since you need a two-dimensional task list.

Techniques: desktop background for the quadrant, and empty file icons for tasks. Alternatively, draw the quadrant on a Big Visible Chart, and write each task on a yellow sticky note, which you can move around. 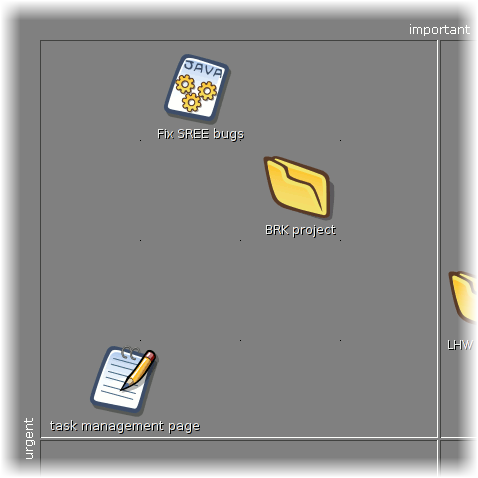 Software: none. Perhaps we need a Web 2.0 task manager application, with draggable task icons and mashup-friendly iCalendar and RSS integration...