On Friday we attended the first edition of the [Joy of Coding](http://joyofcoding.org/) conference in Rotterdam, our hometown. As company we find it important to support local communities to enable knowledge-sharing and networking. We were happy to sponsor the conference and to provide a programme application for both iPhone and Android. 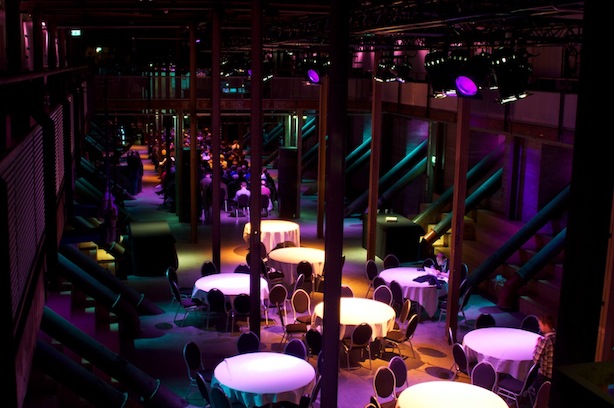 The conference venue was not what you usually expect from a software conference. The industrial interior of the Maassilo, an old grain silo, which at night hosts dance events, added some special ambience.

The conference kicked off with the keynote by Michael Feathers, which he started by telling us how cool he thought it was that a conference could be about the joy of coding, and continued with the story of what it means to him.

Jim Webber’s talk on graphs, undeniably entertaining, included some very interesting topology examples. Among other things Jim explained the triadic closure using an example based on the evolution of alliances before World War I. The key take-aways from this talk were how fast the Neo4J graph database is, and how natural it is to answer questions about data by navigating the graph, as illustrated by the way that we find our way from A to B on a metro map.

Simultaneously to the presentation track there were two hands-on tracks. The room was packed for the AngularJS workshop which is undoubtedly another sign JavaScript is being at last taken seriously.

The last talk of the day was Chad Fowler’s closing keynote. Chad’s very personal story wasn’t much related to the `coding' theme of the conference but gave some good insights in the `joy' part, including the observation that `programmers aren’t very good at being happy'. Even though Chad didn’t intend to teach us anything in the keynote, the take-away message is that joy can and should be intrinsic.

The day wrapped up with a reception. It was nice to see many familiar faces and to meet new people who travelled from Sweden, Denmark and Hungary, to mention a few, just to attend the conference. Around 50 people attended the post-conference dinner at Restaurant Tinto where we were brought by water taxis.

In summary, it was a day filled with inspiration and joy. We have a great community here in Rotterdam and in the Netherlands in general. We are looking forward to the next edition in 2014.

I have been involved in the organisation of the Joy of Coding conference and I must admit it is extremely satisfying to receive so much positive feedback from both attendees and speakers. That said, there is always room for improvement and we are carefully listening to all remarks. You can be sure we will work hard to make Joy of Coding better next year.