We thought it was time to start another tradition alongside our world famous parties. Someone, who shall remain anonymous, came up with the concept of organizing a golf tournament. - On 22nd September 2006 the first annual Lunatech Research Golf Invitational was born.

We had a variety of golfers and handicaps, some of whom flew in from the other side of the world. For scoring, we elected for Stableford rules. We chose this system as it is fairly commonplace in such an event, and quite honestly the only way I had any shot at winning the trophy. 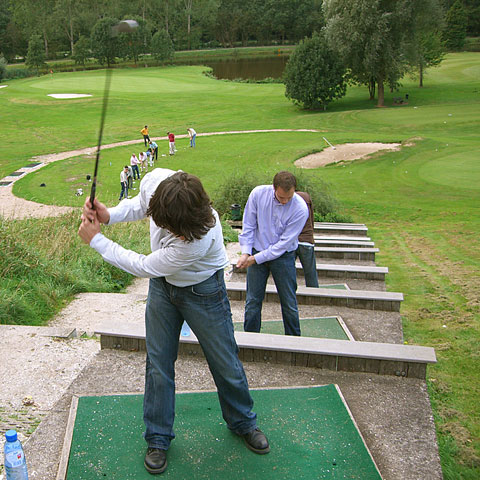 The Tournament - At 13:18 we hit the point of no return, the first flight teed up and teed off. This flight, made up of bankers, was to show their creativity with figures was not limited to financial matters. Yours truly was in the last flight, counting on a large gallery for the approach to the 18th green. During my round I forgot to focus on the task at hand, and rather continued with my marketing campaign of littering the course with golf balls with our company logo. Good viral marketing action, but alas no prize for me on this fine day. 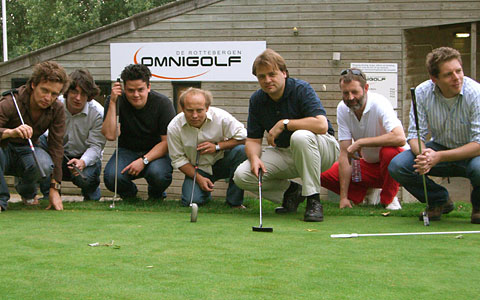 The Clinic - While those claiming to be proficient set off onto the course, the fun people remained close to the clubhouse (and the bar!) to improve their driving, chipping and putting. It was clear that some had had more practice than others, but all seemed to enjoy the fine weather and expertise of the pros. You can tell much about a person from the mumbling under their breath when a stroke goes slightly awry, but it would be churlish to comment upon it on the open press! Perhaps that will be Keith's next article, you have been warned! 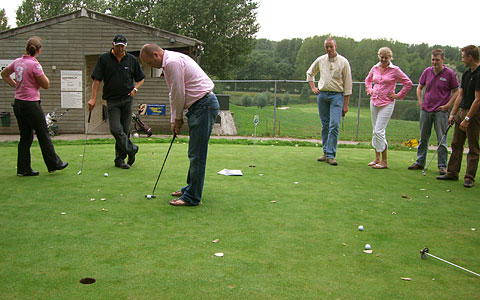 The Celebration and Prizes - When all was said and done, we had a tie: Michele Wilson (our lone female golfer) and Lennart van Hemert representing the men. The "standard" rules for settling a tie in this case are either the person with the lower handicap, or the score on the back nine. In both cases, we had a clear winner - Lennart. Michele finished in 2nd place, followed by Serge Ray in third. 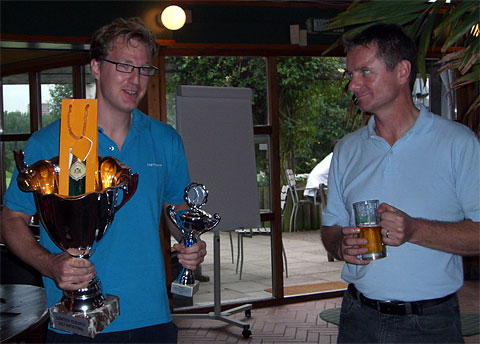 Dominique van Doorn and Alexander van Randwijck came out as the winners of the clinic competition, first and second place, respectively, winning a good bottle of bubbles and a small prize from the pros. Starting later than the golfers and finishing early, the clinicers proved they could enjoy themselves and the hospitality of Lunatech.

Drinks and Dinner - after enjoying some celabratory drinks and finger foods, we switched focus to eating and more drinks. The guests were provided with a buffet of spicy foods, fine wines, and excellent conversation with good company. When we noticed the lights being dimmed repeatedly, we decided it may be time to move on.

The Afterparty - a few of us returned to my house for the afterparty. We feasted on drinks and delicacies from the far corners of the earth. We danced to Abba and other 80's camp music. Next thing I recall was awaking to "Team America World Police" and noticing that the last guests quietly let themselves out. Patricia and I fell asleep on the couch (on each other's shoulders). Yes, a tradition has been born.

From the feedback we have received, much fun was had by all. We will start with preparations earlier for next years event. We have already had requests for the date and were informed by some of the clinic attendees that they plan on taking part in the tournament. (NB: Our fiscalist was cursing the person who hit his car and dented the paintwork, I deny any knowledge of this event).